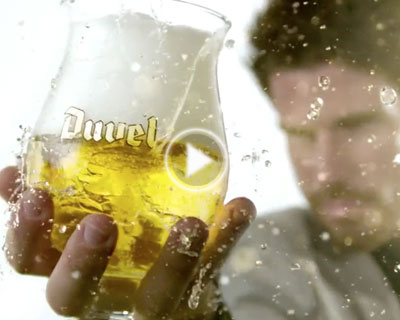 VIZ worked again with Stef Viaene, on his third Duvel beer commercial for producer Latcho Drom in Brussels. The film shows an explosion of beer shot in reverse and includes special-effects with beer, beer-foam, exploding glass and colliding jets of beer.

Many “layers” were shot for use in post-production. After tests in our studio in Amsterdam, the high-speed shoot took place at FXBox in Brussels, using the Phantom.

Tested in our studio in Amsterdam, we tried different pressures, angles and timings.

Jets of beer colliding
Drops of water of different sizes collide. We can time the impact to coincide with other events.

Taken on set at Monev Studios in Brussels while we were working…First during the test day with the Phantom and a week later on the final shoot.